Thank you for sharing MLP Weekly: FERC Irks MLP Investors. Your email has been sent.

MLP’s are once again being forced to repel investor concerns about the health and stability of their cash flows.  The latest assault is from FERC, which has been contemplating two issues related to MLPs (1) whether income tax expenses should be considered in setting cost of service rates for Interstate pipelines (2) How the changes in Tax rates should be reflected in rates. On Thursday, FERC  announced their decision, which was expected, but MLP investors sold on the headlines and many PR teams were unable to respond to market concerns prior to the close, leading to some ugly declines.

After nearly a decade of debate and recent legal action initiated by United Airlines, on March 2016, the D.C Circuit Court ordered FERC to demonstrate that there is no double recovery of income taxes by MLPs, which do not pay income tax but rather pass through the obligation to unit holders, or adjust the approach to prevent double recovery of taxes.  The FERC announcement released on March 15th prevents MLP's which operate interstate pipelines using cost of service rates, from including income tax expenses in their cost basis.  While the exclusion applies to a subset of older pipeline agreements, nonetheless, the market sold every name after the headlines.

By the end of the week, Management provided feedback on whether the decision would have a material impact on their cash flows, for which the majority declared no material impact to 2018 DCF.  Below are large cap Midstream responses to the FERC announcement as of Friday March 16th

Buckeye Pipeline Partners  announced today that, although Buckeye is a Master Limited Partnership (“MLP”), it does not expect the Federal Energy Regulatory Commission’s (“FERC”) revised policy statement issued yesterday holding that pipeline companies organized as MLPs are not entitled to recover an income tax allowance in their costs of service to have a material impact on Buckeye’s operating results.

Enterprise Products   announced that revisions announced today by the Federal Energy Regulatory Commission (“FERC”) with regard to its 2005 policy for recovery of income taxes are not expected to have a material impact to the earnings and cash flow of Enterprise. The FERC announced today that it would revise its 2005 Policy Statement for Recovery of Income Tax costs so that it no longer will allow interstate pipelines owned by master limited partnerships to recover an income tax allowance in the cost of service.

Tallgrass Energy Partners  announced today that it does not expect policy revisions governing recovery of income taxes released today from the Federal Energy Regulatory Commission (FERC) to have a material impact on the company’s revenues. “While we are in the process of reviewing the FERC orders, it’s important to note that the bulk of TEP’s revenues come from REX and Pony Express,” said Tallgrass Energy President and CEO David G. Dehaemers Jr. “Both REX and Pony Express have negotiated rate contracts, and we expect the ruling would have little to no impact on these revenues. While TIGT and Trailblazer both have some recourse rate contracts, we expect the impact to be immaterial to Tallgrass given the relative size of those businesses.

Magellan Midstream Partners announced today that it does not expect a material impact from today’s revised policy statement by the Federal Energy Regulatory Commission (FERC) to disallow income tax allowance cost recovery in rates charged by pipeline companies organized as master limited partnerships (MLPs).  Although Magellan is organized as an MLP, it does not have cost-of-service rates that would be directly impacted by this policy change. Rather, the rates on approximately 40% of the shipments on Magellan’s refined products pipeline system are regulated by the FERC primarily through an index methodology. As an alternative to cost-of-service or index-based rates, interstate pipeline companies may establish rates by obtaining authority to charge market-based rates in competitive markets or by negotiation with unaffiliated shippers. Approximately 60% of Magellan’s refined products pipeline system’s markets are either subject to regulations by the related state or approved for market-based rates by the FERC. In addition, most of the tariffs on Magellan’s crude oil pipelines are established by negotiated rates that generally provide for annual adjustments in line with changes in the FERC index, subject to certain modifications.  Page 700 of the FERC Form 6 filed by interstate pipeline companies on an annual basis is a screening tool for analyzing whether a pipeline may be over- or under-earning on a cost-of-service basis. For the year 2016, which is the latest information available, Magellan’s Page 700 indicates that it is under-earning on a cost-of-service basis even with the income tax allowance line item removed.

Williams Partners  Given the relatively small percentage of our revenues that are affected by this ruling, we don’t expect this ruling to impact our previous guidance for WMB and WPZ cash dividends and distributions and related growth rates. Additionally, as we’ve often discussed, we are well-positioned to execute on corporate structure changes, which would restore the income tax allowance to the pipeline’s cost of service rates.

Energy Transfer  Partners is aware of revisions the Federal Energy Regulatory Commission (“FERC”) is proposing to its 2005 Policy Statement for Recovery of Income Tax Costs, which if adopted after a public comment period, would no longer allow interstate pipelines owned by master limited partnerships to recover an income tax allowance in the cost of service. These revisions are not expected to have a material impact to ETP’s earnings and cash flow. Many of ETP’s rates are set pursuant to negotiated rate arrangements or rate settlements that it believes would not be subject to adjustment, or would be limited in terms of adjustment. In addition, many of its current transportation services are provided at discounted rates that are below maximum tariff rates, many of which it believes would not be impacted by a change in the maximum tariff rate.

Enbridge Energy Partners is organized as an MLP and certain of the rates applicable to its expansion projects are tolled annually on a cost of service basis, via the Lakehead Facility Surcharge Mechanism (FSM). EEP intends to ask for rehearing of this policy change at the FERC. FERC's new policy will take effect when the policy is published in the Federal Register which, for purposes of estimating the 2018 impact, is assumed to be March 31, 2018. Should FERC's new policy be approved as announced, the 2018 financial impact to EEP is expected to be an approximate $100 Million reduction in revenues and a $60MM reduction to distributable cash flow (DCF), net of non-controlling interests.  Based on the foregoing preliminary analysis and estimates, EEP is adjusting its 2018 DCF guidance range to $650 million - $700 million from $720 million - $770 million and 2018 total distribution coverage to approximately 1.0x from approximately 1.15x.

MPLX  LP has reviewed the March 15 Federal Energy Regulatory Commission (FERC) policy revision, in which FERC no longer will allow master limited partnership interstate natural gas and oil pipelines to recover an income tax allowance in cost-of-service rate filings. The partnership expects these revisions to have a de minimis effect on its earnings and cash flow.

Andeavor Logistics  anticipates that the ruling may only have a possible annual negative impact to Andeavor Logistics' net earnings and EBITDA of less than $10 million, which reflects the entire potential impact of changes in the FERC corporate tax allowance.  In addition, the FERC ruling also addressed the rate structure of certain pipelines operated by SFPP, L.P.  Andeavor (NYSE: ANDV) is a party to these cases involving SFPP, L.P. and anticipates receiving refunds that will have a positive impact upon future cash flows, which we are in the process of estimating.

Spectra Energy Partners, LP today provided its preliminary assessment of the potential impacts of the Federal Energy Regulatory Commission's (FERC) recent policy change with respect to the recovery of income tax amounts included in the cost of service  pipelines within a master limited partnership (MLP).  On March 15, 2018, FERC changed its long-standing policy on the treatment of income tax amounts included in the rates of pipelines and other entities subject to cost of service rate regulation within an MLP. In its order PL17-1-000, FERC revised a policy in place since 2005 to no longer permit entities organized as master limited partnerships to recover an income tax allowance in their cost of service rates. SEP intends to ask for rehearing of this policy change at FERC.  Roughly 60% of SEP's gas pipeline revenue comes from negotiated or market-based tariffs and therefore not directly affected by the FERC policy revisions. The remaining 40% of gas pipeline revenue is derived from cost of service based tariffs which could be subject to tax recovery disallowance. The liquids assets within SEP are predominantly negotiated tariffs and also not materially affected by the policy revisions.

SEP anticipates no immediate impact to its current gas pipeline cost of service rates as a result of the revised policy and therefore no impact is expected to its previously provided 2018 financial guidance. Any future impacts would only take effect upon the execution and settlement of a rate case. In the event of a rate case, all cost of service framework components would be taken into consideration which we expect to offset a significant portion of any impacts related to the new FERC policy. Any unmitigated impacts are not anticipated to materially change SEP's distributable cash flow outlook beyond 2018.

One additional concern is whether these income tax exclusions will be applied retroactively.  Below is a recent letter from the American Gas Association, which represents pipeline customers, arguing the merits of such a rebate 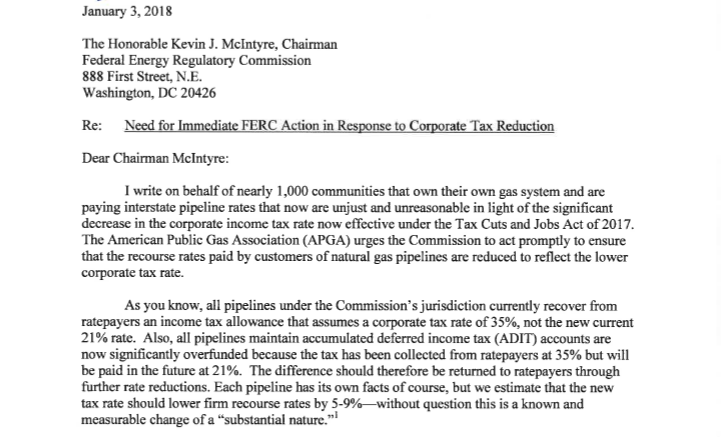 The net impact of the FERC decision is a likely a long term reduction in the number of MLP's , with cost of service exposure, and another financial reward to those MLP's who are considering a C-Corp conversion.