Thank you for sharing MLP Weekly: MLP Structure in Retreat. Your email has been sent.

As units continue to meander through 2018, a growing number of Sponsors and Management teams are Simplifying their MLP structure to eliminate Incentive Distribution Rights with the expectation that equity issuance costs will be lower after the impact of the IDR conversion is digested.  This week, hedging with a C-Corp midstream alternative, just in case the demand for new equity issuance does not improve beyond this year, is the latest chapter of Simplification.  Even the MLP Association, recently renamed from the National Association of Publicly Traded Partners, has realized the need to expand their tent, and will now include  Midstream Corporations in their annual conference.

The end is not near for the majority of units, but the end of life exit plan is being accelerated for many.  This past week, EQT Corporation announced plans to create a new C-Corp which will include all of their Midstream assets expected to close by Q3 2018.  Rice Midstream Partners will be merged into EQT Midstream and EQGP will own the Incentive Distribution Rights for the combined entity.  The separation provides EQT with another vehicle, in addition to EQM and EQGP, to maximize the value of the midstream assets and raise the nearly $5B of expected growth capex over the next 5 years, while reducing the need for EQM to raise funding to pay for drop down assets which presumably will no longer be undervalued.

Simplification was also announced by Alliance Resource where their General Partner, AHGP, will be acquired by ARLP in a stock transaction. As disclosed in their release, the transactions are intended to simplify the organizational structure of the Alliance Partnerships, increase investor transparency, attract a broader investor base to a single, larger entity with increased public float and greater liquidity and eliminate the duplicative costs required to maintain two public companies

Below are a few notable comments during recent Q4 Earnings call

On MLP Simplification and the Role of a Midstream C-Corp - Energy Transfer's CEO Commented "  We just can't risk any kind of negative view by rating agencies and until we get our financial health improved and the family, we will not be doing any kind of consolidation. But as soon as we can, we will."..."We are interested in a C-Corp structure. As you know we almost did one with the Williams transaction. We have many quality assets that are already in a corporate structure and they're quality assets. So we're exploring having a publicly traded C-Corp in the family of Energy Transfer that will allow us to better access the capital markets and hopefully there'll be more to follow on that."

On the Objectives for Simplificaiton and Distribution Cut - NuStar Energy's CEO comments "We had 3 goals in mind always, which was restore a distribution coverage, set ourselves up to allow us to reduce our leverage, long-term and then minimize our need to access the equity markets. And in trying to balance all three of those, we felt like this was the most appropriate number, particularly in the near term, as you want to maintain above one and as we go out, as we said on the call, we plan to run a very healthy coverage, well above one and at the same time, allowing us to consider a distribution increases and continued deleverage. So, all of those play a big role in our thought process." 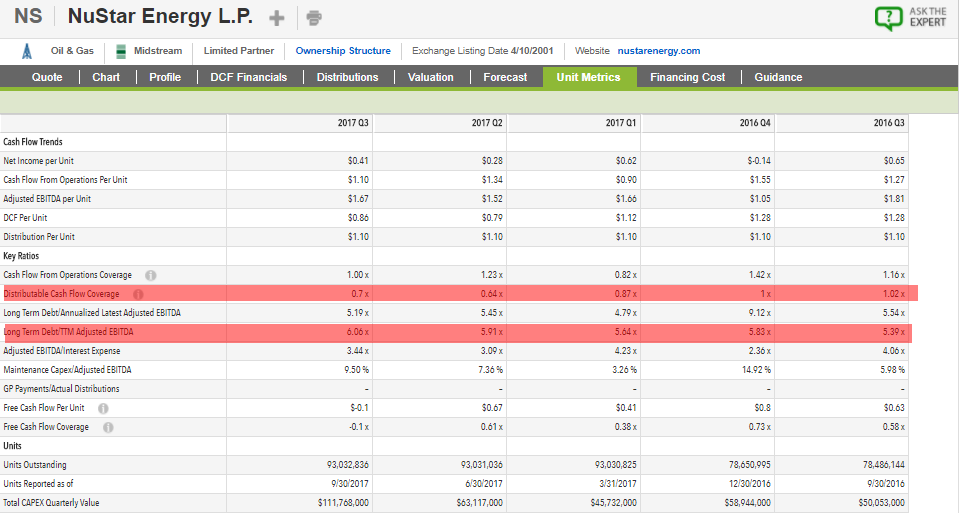 The chart below plots Trailing Twelve Month DCF Coverage and the forward annualized yield for all midstream units.  Premium subscribers can interact with the charts here

Since the end of January, flows have turned negative for the month of February and a meager $2.53B for the trailing twelve months against an AUM base of nearly $60B